The Steelers didn’t show up on Sunday night vs. the Patriots putting Big Ben is in a great bounce back spot. Home against Seattle, he has a lot of things in his favor. Seattle just got gashed at home by Andy Dalton for over 400 yards. The Seahawks secondary has major problems. They couldn’t cover John Ross, what makes you think there going to cover Juju. Seattle also has to make the West to East coast trip. Big Ben is notoriusly better at Heinz Field then on the road and should not garner high ownership. Be sure to stack Juju with him.

Like the Steelers on Sunday night, Michel didn’t do much. Michel got 15 carries and only stumbled for 14 yards. This week he gets the Dolphins. The Dolphins. Michel will definitely fall into the endzone at least once. If Michel did anything Sunday night his price would be $1,000 more for sure. We get nice value and of course a positive game script.

Heading into the week I wasn’t in on Fuller. But Jaguars lock down corner A.J. Bouye will not play this game. Jalen Ramsey will follow Nuk Hopkins all over the field allowing Fuller to face the Jags weaker defensive backs. Vertically, none of them can hang with Fuller. I don’t expect the Texans to have success on the ground. Fuller has massive upside at this price. 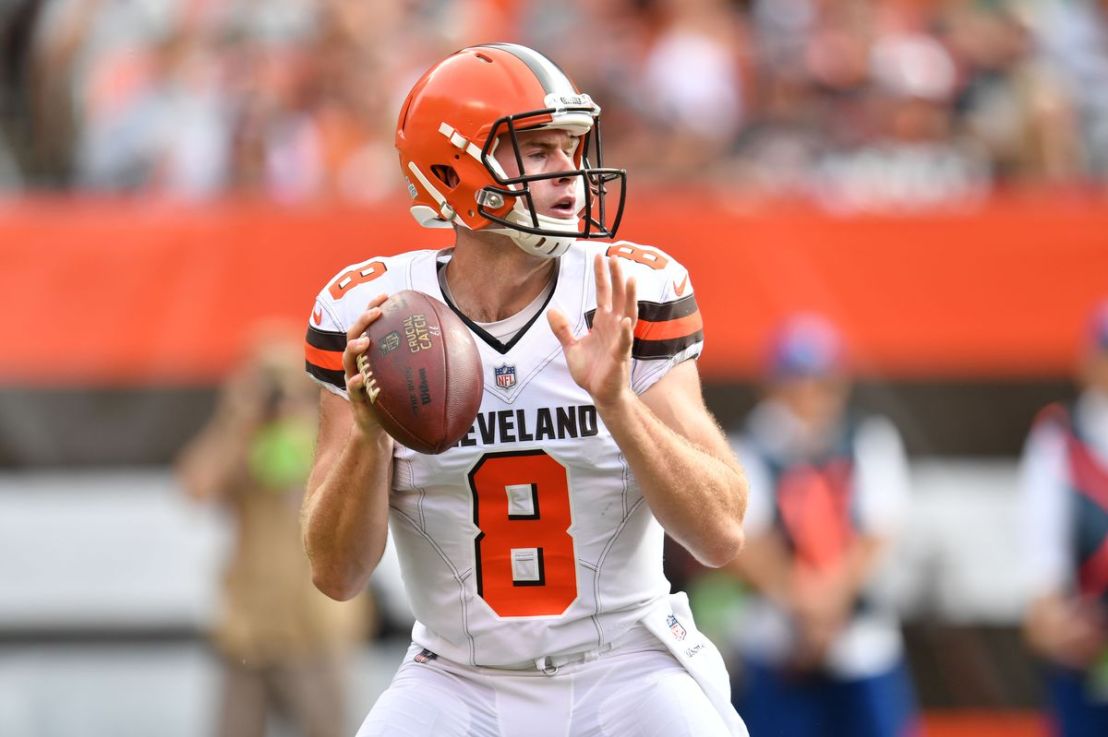 Hogan will be getting his first career start this Sunday in replace of DeShone Kizer. The second-year pro out of Stanford is mobile and has shown in previous games where he has replaced Kizer or in last year’s case, Cody Kessler, that he can make plays with his legs. Last year, when Hogan replaced Kessler, Hogan scampered 7 times for 104 yards and a touchdown. Two weeks ago, the Texans let up 39 rushing yards and 2 touchdowns to Marcus Mariota in the first half. Mariota missed the second half due to a hamstring injury. With the Texans losing J.J. Watt and Whitney Mercilus for the rest of the year, this game could become a shootout with a projected total of 47 points from Vegas. The Texans have allowed the 7th most fantasy points to Quarterback’s. Hogan’s passing numbers last week against the Jets were more than fine, posting 194 yards through the air with 2 touchdowns and 1 interception, completing 16/19 passes.

Don’t get me wrong, it will take some guts to play Hogan, but for his price, he opens up the rest of your lineup. He can have 10 fantasy points on Sunday and it wont kill you. If you lose, it’s because of the players you picked in your lineup with Hogan. He won’t be higher than 5% owned and should hit value at the minimum.

JuJu on that beat? The rookie from USC has played and ran more pass routes than Martavis Bryant over the last three weeks. Smith-Schuster is also top-10 in both Red Zone targets and targets inside the 10. The matchup that we want is Smith-Schuster in the slot vs Chiefs slot corner Phillip Gaines. Gaines is one of the worst slot corners in the league and has been continously picked on especially with the rise in play of left corner Terrance Mitchell. A rumor out of Pittsburgh suggests that Martavis Bryant could get a “break” at times on Sunday allowing Eli Rogers to be in the slot which would place Smith-Schuster outside. I don’t expect this “break” to have such an impact that Smith-Schuster won’t see Gaines often. Big Ben’s horrid play last week doesn’t worry me as he still threw for 312 yards, although it was on 55 attempts. The Steelers should be trailing in this game vs the leaky Chiefs secondary that has allowed the most fantasy points and touchdowns (9) to Wide Receivers this year.

Humphries is the price of a kicker. He has seen targets of 5, 7 and 10 the last three weeks. Patrick Peterson will shadow Mike Evans all over the filed which should leave some targets up for grabs. Last year, Humphries saw 8 targets and reeled in 6 catches for 67 yards vs the Cardinals. That would hit value on Fanduel with his current price. In that game, Jameis Winston was putrid throwing 4 interceptions. That won’t be the case Sunday as the Cardinals have given up the 5th most points to Wide Receivers.

Humphries upside is capped because the Bucs don’t need him stretching the field with Jackson and Evans. However, he is a safe dart if there is ever a thing due to his steady target share of 7 targets on average over the last 3 weeks. He has a high floor in a game that will be high scoring.

The coveted late round preseason sleeper in season long leagues has had a bit of a roller coaster season. Hooper’s first three games resulted in a surprisingly low target share only recording two targets in all three. In week one, Hooper had a fluky long touchdown that went for 88 yards, but credit has to be given to a violent stiff arm that he delivered to Quintitn Demps.

In weeks two and three Hooper had a combined 16 yards. In week four, Hooper collected 7 targets and 5 catches for 50 yards. While this was a byproduct of the Falcons losing Julio Jones and Mohamed Sanu to injury, Sanu is looking doubtful to play Sunday. Although Jones will probably play, it is worth noting that Hooper ended up leading the team in catches and targets with the receiver duo being sidelined.

Opposing offenses are targeting Tight Ends on 28% of throws vs the Dolphins which is the 4th highest in the league. Hooper has played on 70% of snaps in four-straight games and with Sanu looking unlikely to play Hooper has massive upside in tournaments.